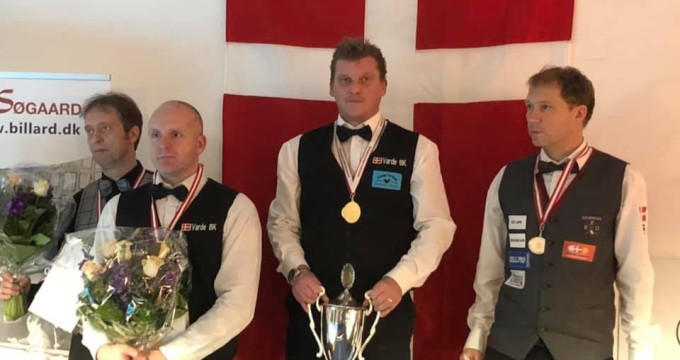 Last weekend, like in Holland and Belgium, there was the Danish Championship in 3-cushion billiards.

The Championship in Denmark was played in the city of Vejle, in front of a capacity audience.

He won his first Danish title in 2016, beating Tonny Carlsen in the final game.

In 2017 he also won the Nordic Championship.

In the semifinal at the 2019 championship, he was behind 9-26 in 16 innings at the break against Lars Dunch.

The orther semifinal was a showdown between the reigning Danish Champion Dion Nelin and Brian Zola Hansen.

In a tight and tactical game, Dion Nelin won the match with the score 50-49 in 44 innings.

Brian Zola missed a chance to finish at 49, and then Nelin scored the 2 points to win the semifinal.

In the Championship final, Thomas Andersen was leading at the break 26-22.

And he had the momentum after 35 points, mainly because Dion Nelin was struggeling with his game and his stroke.

Thomas Andersen kept on scoring and finished the Championship game in fine style in the 36 inning, and won with the score 50-41.

Dion Nelin lost his title, and also lost 12 points on the world ranking.

It was the first time, that Dion Nelin lost a Championship decinding final game in Denmark.

Eight times before the 2019 final, Nelin had played a final at the Danish Championship, and he had won them all.

Tonny Carlsen, the best Danish player on the world ranking, did not qualify to the KO matches from the group phase with 16 players in 4 groups.

Thomas Andersen made the highest run of the Championship with a run of 15.